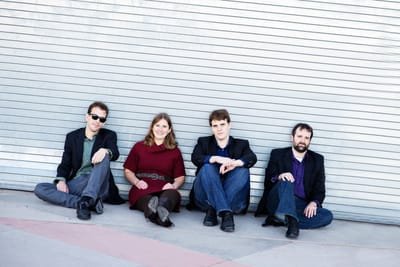 The Estrella Consort is a saxophone quartet committed to the performance of exciting works, both old and new. Founded in 2010 while its members were pursuing graduate degrees at Arizona State University, the group has performed and presented educational workshops and clinics throughout the United States and abroad. The group’s first major tour took them through several cities in Ecuador as part of a cultural exchange in 2011. In the years since, the Estrella Consort has presented guest artist recitals and workshops at numerous institutions including Northwestern University, Arizona State University, the University of Michigan, the University of Tennessee, Vanderbilt University, and many others.

The Estrella Consort presents thoughtful, exploratory performances of saxophone quartet repertoire ranging from the French classics, to transcriptions, to the living composers of our time. The group has premiered works by such composers as Elliot Miles McKinley, Robert Reinhart, Scott Rubin, and others. They have also frequently worked with young composers and saxophonists to expand the saxophone quartet repertoire. The Estrella Consort’s first commercial recording was released in 2019 on Navona Records, featuring the chamber music of composer Elliot Miles McKinley. An album of music by Xenakis and others is forthcoming!